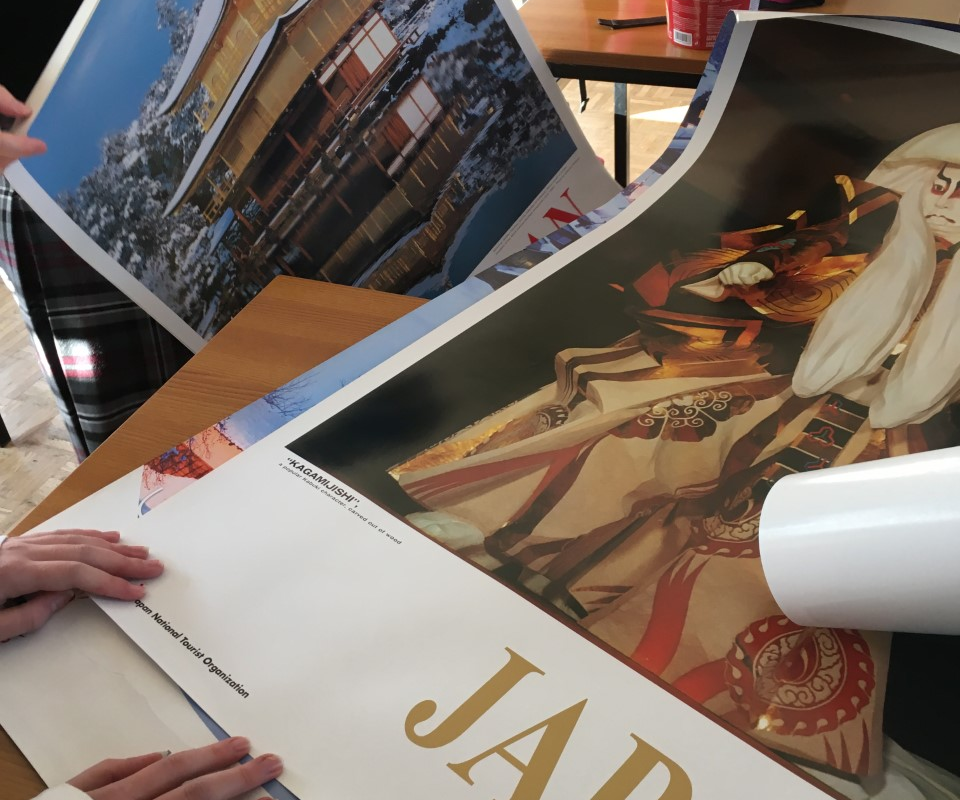 Konnichiwa! Hope you’re hungry because we got Cake and Melon (Caoimhe O’Sullivan and Melodie Aremu) here to tell you all about how we celebrated Cherry Blossom Week! 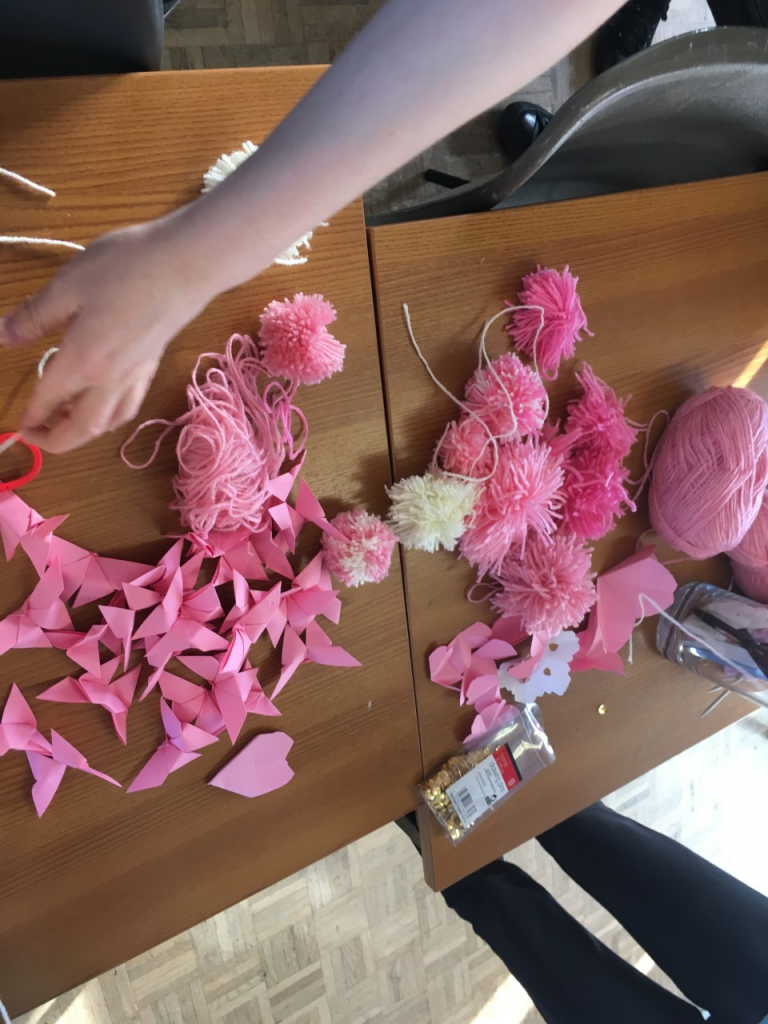 For those of you who live in a pineapple under the sea, and were confused by what exactly was going on this week, we were celebrating Hanami, an annual Japanese festival (which explains the branches in the hallway). 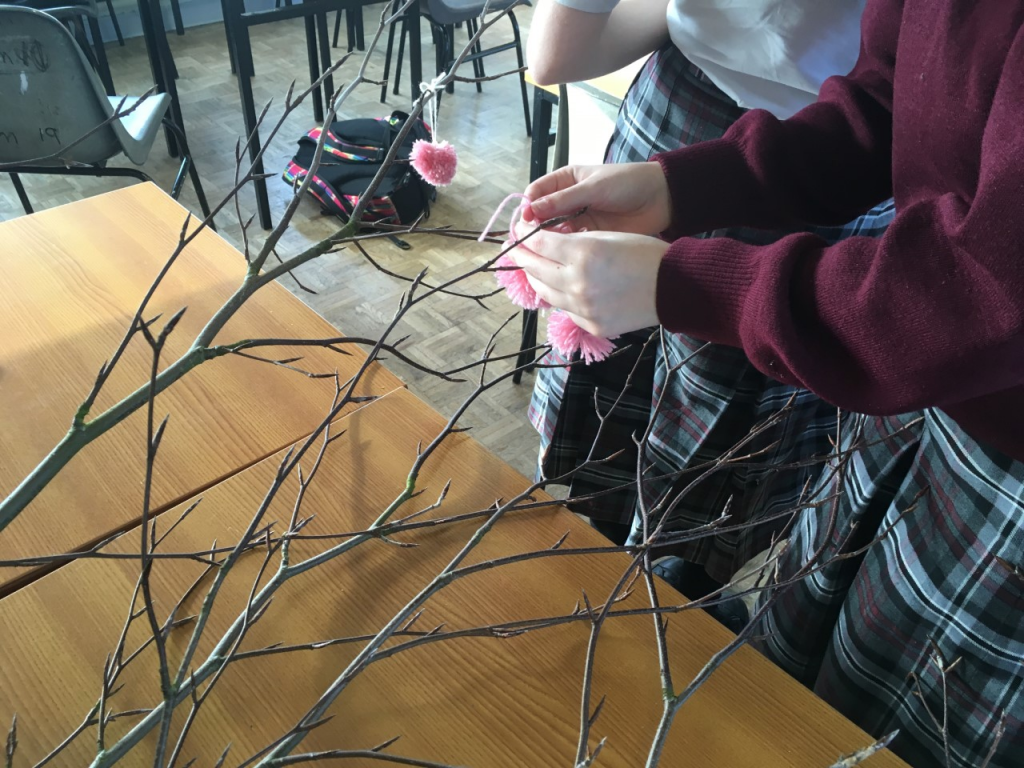 As one way of celebrating we had a word of the day for the duration of the week,

The word of the day was “Moshi Moshi” which is what you say when you answer a phone, in the same way that we would say “hello?” or more commonly used, “what do you want?”. Siobhán gave us this in the morning and it is Ms Navarro’s favourite word, or words if you like 😊.

Later on in the day an amplifier (speaker 😉get it?… sorry.) came in for a sort of…… Q and A session, for students from the anime club, the environmental group and anyone else who wanted to get out of cla… *coughs* I mean, who sincerely wanted to learn about Japanese culture. I’m joking, the questions asked were really interesting and we all agreed that we learned quite a lot.

The speaker’s name was Hiro-Ino, a Japanese lawyer who has been living here for 28 years! He answered all the questions that were yeeted (yote? – thrown xD) at him with immense detail and clear knowledge of Japanese culture.

After about an hour, everyone, except for the environmental group and the anime club, were force.. *coughs* I mean advised to return back to class(so sorry, it’s a really bad cough..)

Once they were gone, Hiro gave us all pamphlets and biscuits including Pocky and Japanese KitKats (FOOOOD! Hope you’re jealous 😊). We all then proceeded to go outside and plant a prune tree, which we named ‘Hiro Ackerman’, in honour of Hiro-Ino and Levi Ackerman. And for those of you who live under a ROCK and do not know who Levi Ackerman is, he is a character from the anime Attack On Titan………

BUT NOT JUST ANY CHARACTER! THE character!! Captain of the most elite squad within the Survey Corps(a division in the army), defender of humanity against titans, which are giant humanoids that eat people! Humanity’s STRONGEST SOLDIER!! And he does this with such elegance, such efficiency, such………

We can’t do justice with words! He’s just too awesome!!

My sincerest apologies we’ve sort of trailed off a bit 😅,  sorry.

Anyway, back to the task at hand, we planted the tree, took a few pictures and gallivanted back inside to begin watching one of the best studio Ghibli movies ever made………..’Ponyo!’

Soooooo……… this is the extent of our activities for Monday, which we thoroughly enjoyed, but sadly it came an end, but it wasn’t THE end……. 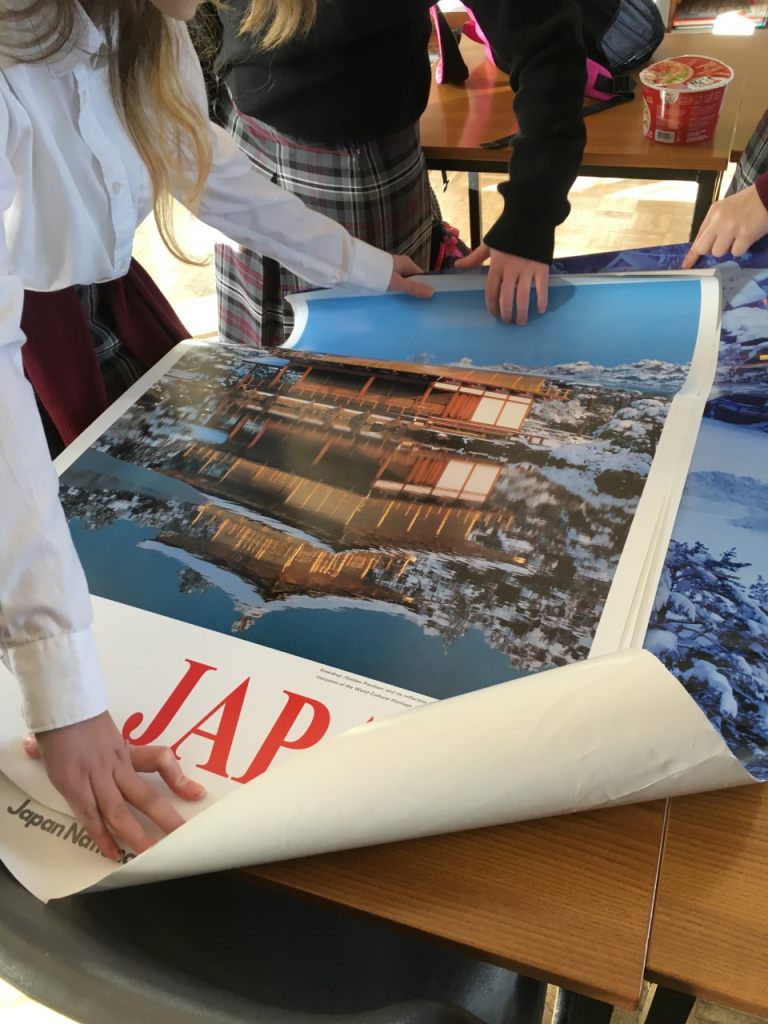 The word of the day was “Konnichiwa”, which means “hello”. This is what you do to greet people if you didn’t…….. if you didn’t know…….

Anyways! So we are going on a trip NOT in our favourite rocket ship😛, train actually……ALLL the way to Heuston, and from there, we’re going to take a shuttle bus up to Farmleigh to the experience Japan festival!

We’re going to spend the whole day out and about, from 10:40am to 5:06pm exactly (oddly specific, I know), basking in the glory of Japanese culture, cosplay and food of course (can’t forget food😉). We depart for our adventure (time, *reference*) on the 7th of April A.K.A this Sunday. Hedwig flew here and personally delivered this information to us in the form of a letter………….(Ms. Magera gave it to us LOL)

Oh yeah! We continued to watch more of Ponyo too!

And thus, another glorious day in Holy Family Secondary School came to a close… 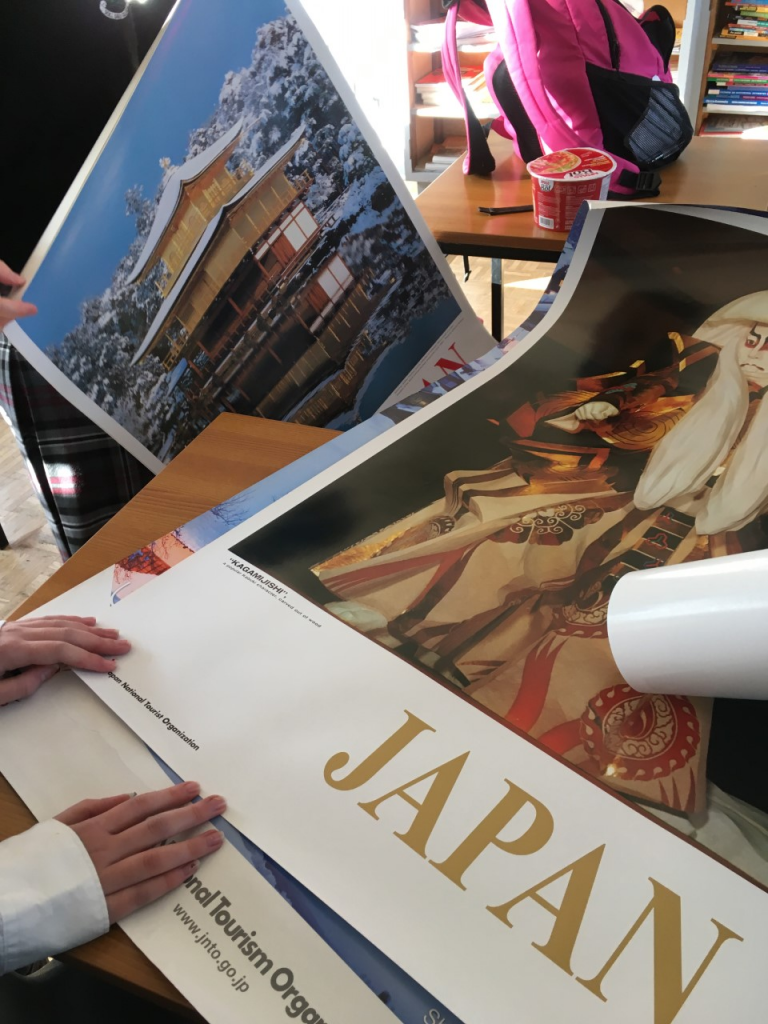 Experience Japan, 7th of April 2019 was, the best…day trip…in the history…OF DAY TRIPS!!! Being entirely engrossed in the captivating culture of Japan, with events ranging from its traditional music, dance, cosplay and of course, it’s TOTEMO OISHII (VERY DELICIOUS) FOOD!!!

There were lots of different things to do and stuff to see, which kept us all pretty busy for the whole time we were there!

We mapped out our course and set off on an adventure full of laughter, smiles and fangirling all round 🙂 we even saw Hiro-Ino there!

We got to dress ourselves in kimonos – which, according to google is “a long, loose traditional Japanese robe with wide sleeves, tied with a sash.”(in-dress-ting 😉)

We got A LOT of food and it was the first time tasting authentic ramen for many of us. The whole trip was full of first times for everyone. I can say with full confidence Experience Japan 2019, was simply, one hell of an experience!! 😉

*TRAVELS BACK IN TIME..*

This day was the most depressing day of the week……. for we did not have the privilege of watching more of Ponyo, butttt…….. we did have the word of the day which was (drum roll please…)

Thursday was ever so slightly better than Wednesday, with the wonderful addition of the continuation of Ponyo!

The word of the day was “Sayonara” which means *cue music* So long, farewell, auf wiedersehen, goodbye.. *music conveniently fades away*

And sadly this brings us to our last day………

The word……. the words of the day were ‘hai’ and ‘iie’ which mean ‘yes’ and ‘no’. (one answer more prominent from each parent, am I right😊*crickets*)

The highlight of this day (but also the saddest) was… we finished watching Ponyo! And if you haven’t already thought of watching it, we would suggest that you stop reading this and go watch it IMMEDIATELY!

And so…. this was the end of the sole best week of the year, and if you disagree, go write a blog about YOUR favourite week, and we can see whose is better……please😁.

And along with the week, has our blog come to an end, unfortunately. But hopefully, with some convincing (and maybe bribery), we may be back next year, if you’re lucky😉!

It’s been fun writing this, but with that we must leave you FOR NOW (hopefully). So, we say Sayonara! And always remember, life’s not a piece of Cake, but thanks a Melon for reading😁 (get it?..) 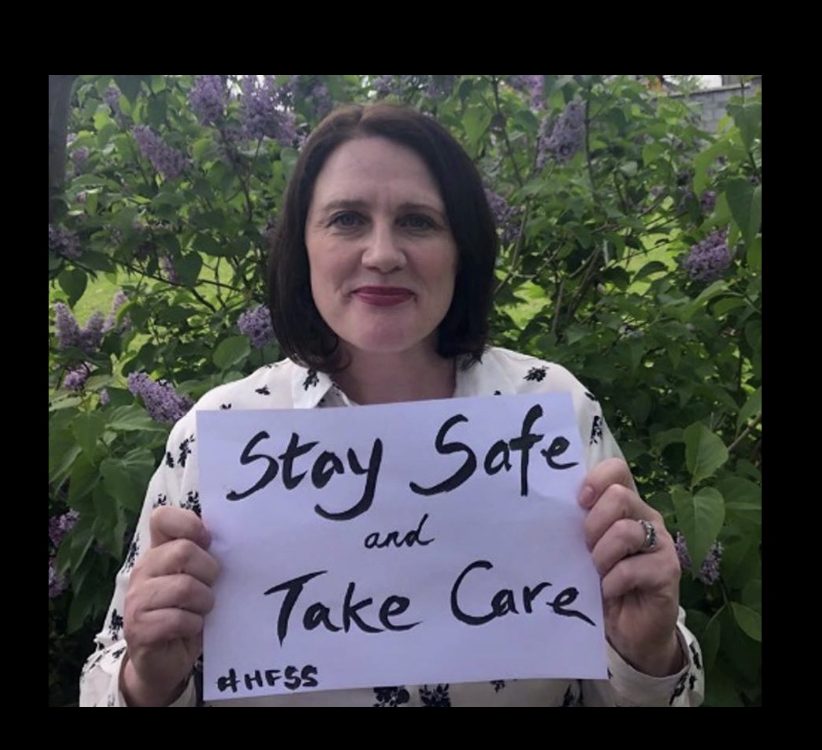 A May message to all our students 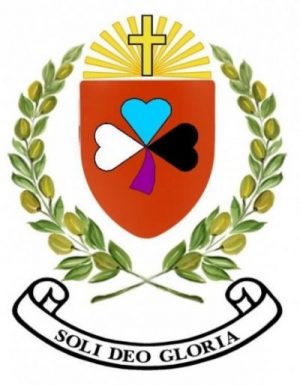